Richard Syrett, one of best radio talk show hosts working today in any genre, interviewed me for an upcoming episode of his podcast Conspiracy Unlimited.

We discussed my new book, Last Clash of the Titans, and covered the links between the gods of the Amorites and Greek mythology, end times prophecy, and the veneration of saints — which is when I learned that Richard is a Greek Orthodox Christian, so my book probably resonates a bit more with him than with Protestant readers.

For the record, I don’t believe Augustine was proposing anything nefarious when he developed the theology of the intercession of the saints. In his mind, he was rehabilitating the pagan belief that the spirits of the ancestors affected the living and had to be appeased. That was the basis of the heros cults of the ancient Greeks, which can be traced to the Amorite veneration of the rapi’uma — the Rephaim, who were the spirits of the “mighty men who were of old,” the Nephilim.

That said, there isn’t a biblical basis for intercession of the spirits of the faithful who have gone on before us. We can approach the high priest, Jesus, directly.

As a good host does, Richard asked where listeners can get Last Clash of the Titans. I pointed the audience to Amazon for the Kindle edition, which will be available at the end of October, and to the SkyWatchTV Store for the great bundle with the new books by Lt. Col. Bob Maginnis and Pastor Carl Gallups.

Both Bob and Carl were recent guests on Conspiracy Unlimited, and Richard jokingly called us “the Triumvirate.”

Since Col. Maginnis would obviously be Caesar, and Carl would make a better Pompey, that makes me Crassus — who managed to lose seven legions to the Parthians at the Battle of Carrhae in 53 B.C.

The interview should be available online in a week or so. 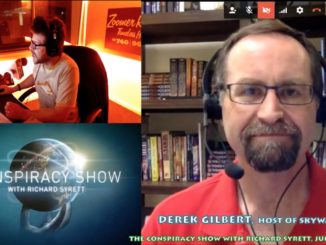 On The Conspiracy Show