Key intelligence about our enemy in the supernatural war has been hiding behind the English translation of your Bible. Let’s look again at one of the most important chapters of scripture, Isaiah 14.

Dr. Michael S. Heiser, author of the highly recommended books The Unseen Realm and Reversing Hermon, has made a good case for the derivation of the word “Nephilim” from an Aramaic noun, naphil(a), which means “giant.”1 It’s similar to the Hebrew word naphal, “to fall,” which has led many to conclude that nephilim essentially means “fallen ones.”

While they certainly were that, Heiser points out that the rules of Hebrew would make the plural form nephulim, while “those who fall away” would be nophelim.2 In other words, “Nephilim” is based on an Aramaic word, because in Hebrew, even though the words look and sound the same, you just can’t get there from here.

The point is this: Heiser has speculated that something similar might be obscuring a more intriguing reading of the end of Isaiah 14:

May the offspring of evildoers
nevermore be named!
Prepare slaughter for his sons
because of the guilt of their fathers,
lest they rise and possess the earth,
and fill the face of the world with cities. (Isaiah 14:20b–21, ESV)

That’s odd. I’m from Chicago. What’s so bad about cities?

Here’s the key: The Hebrew word for “city” is `iyr. In Aramaic, the very same word means “Watcher.” The plural forms are `iyrim and `iyrin, respectively. Thanks to Dr. Heiser, we have a good example above of an Aramaic word that was imported into the Bible and then corrected with the –im plural suffix, transforming naphil(a) into nephilim, according to Hebrew rules of word formation.3 It’s possible that Hebrew scholars in the centuries after Isaiah opted for “cities” to obscure the influence of the hated Watchers.

Now, because you’re very perceptive, you see right off how that would change the passage above in an important way:

Prepare slaughter for his sons
because of the guilt of their fathers,
lest they rise and possess the earth,
and fill the face of the world with Watchers. (Isaiah 14:21, ESV, modified)

That puts a new spin on the verse—and on the whole chapter, for that matter! Isaiah may have intended to record God’s judgment against the offspring of the rebel angels on Hermon, the Watchers, and their progeny, the Nephilim.

But this isn’t the only place in Isaiah where a Watchers-for-cities swap makes sense.

Behold, their heroes cry in the streets;
the envoys of peace weep bitterly.
The highways lie waste;
the traveler ceases.
Covenants are broken;
cities are despised;
there is no regard for man.
The land mourns and languishes;
Lebanon is confounded and withers away;
Sharon is like a desert,
and Bashan and Carmel shake off their leaves. (Isaiah 33:7–9, ESV; emphasis added)

This is another fascinating section of Scripture. The word translated “heroes” in verse 7 is the Hebrew ‘er’el. Elsewhere in the Bible, it’s transliterated into English as “Ariel,” which means “lion of God.”

While we don’t want to follow unbiblical notions too far, we note that later Jewish tradition was that the Arielites were angels.4 And that isn’t entirely out of context here. The “ariels” in verse 7 are paralleled by “envoys,” which in Hebrew are malakim, a word that means “messengers,” but that often refers to the lowest class of angel. So, reading “ariels” here as “angelic beings” may not be a reach.

Looking back three hundred years before Isaiah, “ariel” was a puzzling reference to one of the exploits of David’s mighty men:

And Benaiah the son of Jehoiada was a valiant man of Kabzeel, a doer of great deeds. He struck down two ariels of Moab. He also went down and struck down a lion in a pit on a day when snow had fallen. (2 Samuel 23:20, ESV; emphasis added)

Compare that to the King James translation:

And Benaiah the son of Jehoiada, the son of a valiant man, of Kabzeel, who had done many acts, he slew two lionlike men of Moab: he went down also and slew a lion in the midst of a pit in time of snow: (2 Samuel 23:20, KJV; emphasis added)

Were the lionlike men of Moab like the descendants of the giants (yâlîyd rapha, “sons of the Rephaim”) encountered by David during his wars with the Philistines?5 In other words, were the ariels, like the Nephilim, human-angel hybrids? The Bible doesn’t tell us, so we can’t know for sure. Rather than speculate, the ESV translators played it safe by leaving the word “ariels” untranslated.

However, the context of Isaiah 33 suggests that the ariels, the “heroes” of verse 7, were more than human. Besides the pairing with the malakim of peace, the references to Lebanon, Bashan, and Carmel, a mountain known as a holy site for centuries before Isaiah,6 indicate either a lament for a supernatural event that had just occurred or dread of something that was about to happen. And that, of course, makes the substitution of “Watchers” for “cities” not only plausible, but logical:

The highways lie waste;
the traveler ceases.
Covenants are broken;
Watchers are despised;
there is no regard for man. (Isaiah 33:8, ESV, modified)

Now, here’s a hint without revealing a spoiler for what’s ahead in Last Clash of the Titans: Make a mental note to remember the word “traveler.” It’s important. You’ll look back at this section and understand why we made this detour.

So, yes, some of this is speculative, but it’s based on the original languages and the cultural-religious world in which Isaiah lived. Yes, Isaiah 14:21 was a condemnation of the king of Babylon, but it appears it was also God’s death sentence on the Nephilim, the sons of the Watchers. And if we consider that alongside the possibility that the “loathed branch” of verse 19 was in fact an unclean god, then Isaiah revealed a lot more about the war between God and the gods than we’ve been taught.

The supernatural rebel known to Hebrews as Helel ben Shachar and to us as Lucifer, one of the cherubim and possibly a guardian of the throne of Yahweh, was kicked out of Eden for rebellion. His plan was to establish a new mount of assembly, Zaphon, as supreme in the cosmos, ruling above the throne of Yahweh Himself. Instead, the rebel was thrown down to the underworld, cast out as an “unclean god” to become lord of the dead, where he was greeted in Sheol by the Rephaim, former “leaders of the earth” and “kings of the nations.”

This, by the way, fulfilled in part the judgment against him for his rebellion:

Because you have done this,
cursed are you above all livestock
and above all beasts of the field;
on your belly you shall go,
and dust you shall eat
all the days of your life. (Genesis 3:14, ESV)

Most of us read this verse and assume that this is when snakes lost their legs and humans learned to hate them. Not so. Adam and Eve weren’t fooled by a talking snake. References to the divine rebel in Ezekiel 28 and Isaiah 14 make it clear the serpent was a supernatural entity, a guardian cherub—a divine throne guardian who got above his raising and was taken down for his hubris.

The interesting bit here, which my wife, Sharon, called to my attention, is the dust eating. You know enough biology to realize snakes don’t eat dust. So, God may have been speaking metaphorically to the nachash. Or, as Sharon pointed out, God may have been alluding to the common belief in ancient Mesopotamia that the dead spend the afterlife wandering about the netherworld eating dust and clay. That’s exactly how serpents were depicted in ancient Near Eastern texts such as Descent of Inanna.7

In other words, Genesis 3:14 telegraphs Isaiah 14:9–11. The pinnacle of God’s creation, “full of wisdom and perfect in beauty,” was cast down from the holy mountain of God to become the abominable, loathed, unclean lord of the dead–the rapha, the Rephaim.

Over time, the rebel nachash established himself among mankind as the storm-god and king of the pantheon under names such as Baal, Hadad (or Addu), Tarhunz, Zeus, and Jupiter.

But even though the storm-god ruled the pagan cosmos for about two thousand years up to the time of Jesus, Baal/Zeus is only one cog in a vast supernatural conspiracy against Yahweh.

You see, the old gods are down—but they’re not quite out. 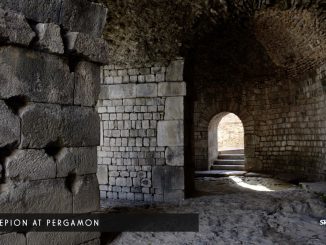 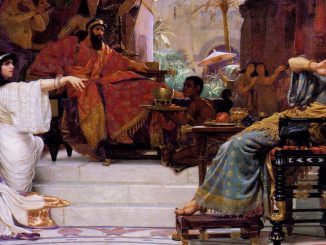 Haman on a Spike