The Mandela Effect theory has been around for more than five years, but it’s apparently hit critical mass. We’ve had a number of queries about it over the last few days.

In a nutshell, the theory is that shared false memories are evidence that history has been rewritten or that we’ve slipped into a parallel, slightly different timeline. It sounds intriguing — but no. If history had been changed we would remember the changed history and never know the difference. And there is no evidence for the existence of alternate timelines.

It’s a fascinating concept, but shared false memories only prove that our memories are imperfect.

For example, Bogart never said, “Play it again, Sam,” in Casablanca. (Carbon dating myself here.) The movie didn’t change after we saw it and we didn’t watch it in an alternate universe. We’re remembering Rich Little or Peter Falk or John Byner or somebody else doing a Bogey impression and misquoting the line.

There is no doubt the effect exists, but it’s nothing more than a false memory or an example of confirmation bias — seeing what one wants to see. They have always been the Berenstain Bears.

SkyWatchTV News 6/8/16: No, CERN Has Not Changed Your Bible 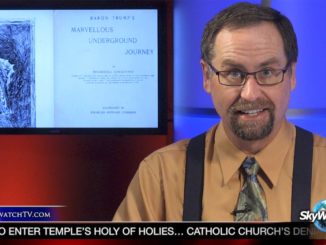 The fracturing of America