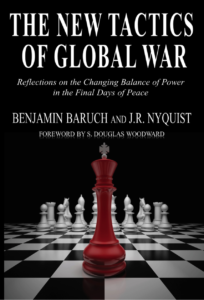 MOST SCHOLARS believe that the United States is not mentioned in Bible prophecy. It’s possible, however, that they have been overlooking clues in Ezekiel 38 and Jeremiah 50 and 51.

Benjamin Baruch, co-author with J.R. Nyquist of the new book The New Tactics of Global War: Reflections on the Changing Balance of Power in the Final Days of Peace, discusses the evidence for identifying America in end times prophecy, Russian geopolitical and military strategy, and the risk of a Russian first strike on America as part of the Gog-Magog war prophesied by Ezekiel.

A View From the Bunker