And it is only just beginning… 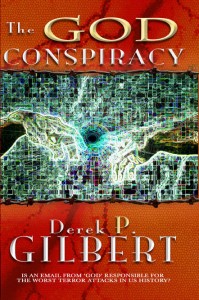 When a small boy in Iowa forwards a mysterious email from ‘God’ to a small group of friends, he unwittingly releases a trigger that sends blood pouring throughout his farming community.

Thousands more are dead across the country in dozens of simultaneous terror attacks and the government blames fundamentalists who want to trigger the Apocalypse.

FBI Agent Joe Unes reluctantly teams with reclusive Internet radio host Barney Ison (from Sharon K. Gilbert’s The Armageddon Strain) to expose the plot — and discovers that the enemy is not of flesh and blood.

Move over Joel Rosenberg, there’s a new quill in the inkwell… I bookmarked several pages for further research, deleted all the cookies from my internet history, checked my rearview for tails, and put a fresh coat of Brasso ™ on my tin-foil hat.
Winston Crutchfield, Critical Press Media

The God Conspiracy has all of the elements of a well-written novel–persuasive theme, three-dimensional characters, dynamic plot, and stable prose… Captivating.
Tom Horn, author of The Ahriman Gate, publisher of Raiders News Network